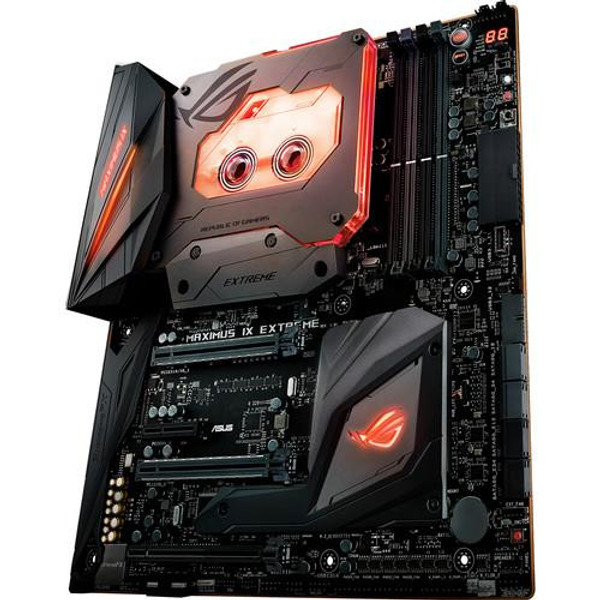 COOL TO THE EXTREME

ROG teamed up with the geniuses at Bitspower to develop an all-new, integrated water-cooling solution for Maximus IX Extreme - one that elevates simplicity and efficiency to extraordinary levels. Designed from the ground up, and ready to work right out of the box, Maximus IX Extreme's built-in monoblock has flow-rate, water-leak and temperature sensors all seamlessly integrated - plus Aura Sync RGB lighting, for instant curb appeal! With dedicated sensors feeding information straight into ROG's intuitive Fan Xpert 4 utility, it's easy to configure options for shutdown timing and alerts, so you can stay on top of the heat and remain cool in every game!

Customize LED effects with intuitive ASUS Aura Sync lighting-control software. Aura allows you to cast a stunning multi-color glow across your build via the ROG Maximus IX Extreme's brilliant built-in RGB LEDs or attached RGB strips via the two onboard 4-pin headers*. Fire up ASUS Aura and enjoy the creative freedom of nine lighting schemes ? and watch all of the lights on your rig glow in perfect synchronization!

ASUS Aura Sync technology makes Maximus IX Extreme the control hub for your illumination ambitions - so it's easy to synchronize incredible lighting effects between compatible components, including RGB LED strips, graphics cards, keyboards and even mice! Change all LEDs in unison or employ dynamic modes to flow the illumination effects smoothly across all synchronized devices.

EXQUISITE AUDIO, INSIDE AND OUT

ROG's awesome SupremeFX audio technology has levelled up, delivering an exceptional 113dB signal-to-noise ratio on the line-in connection and 120dB on line-out - and that means our best-ever recording quality! We've also added a low-dropout regulator for cleaner power delivery to the SupremeFX S1220 codec, an ESS® Sabre Hi-Fi ES9023P digital-to-analog converter for superior front-panel output, and a Texas Instruments® RC4580 op-amp for high gain with low distortion - which all adds up to audio that envelops you as never before.

ROG's Sonic Studio III audio effects station has been updated with an all-new routing feature to port streams to different outputs as well as app-level preferences for instant audio profiles and improved noise filtering for conversations with total clarity!