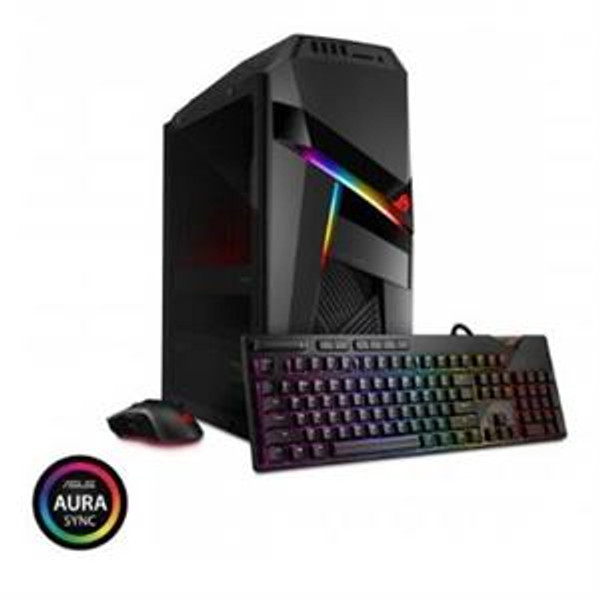 Rebirth of a Gaming Beast

The newly re-engineered ROG Strix GL12CX further pushes the limits of extreme gaming performance and features a striking, unconventional design. This Windows 10 gaming desktop now boasts the latest 9th Generation Intel® Core™ i9-9900K processor (factory overclocked up to a top speed of 5.1GHz) and NVIDIA® GeForce® RTX 2080 Ti graphics for unrivaled gaming experiences. It features the ROG-exclusive DIMM.2 module with support for dual SSDs that can be configured in RAID, along with tool-free expansion bays and an esports-ready hot-swap SSD tray for easy upgrades. A transparent side panel and Aura Sync lighting effects let you customize the colors of Strix GL12CX, inside and out.

ROG Strix GL12CX draws inspiration from stealthy ninjas, with an all-black chassis featuring sharp angles and slashes evoking strikes of a katana on armor. Some of those slashes serve as intake or exhaust vents, while others incorporate Aura Sync LEDs for limitless customization and matching with compatible peripherals.

Only the very best processors are chosen to power ROG Strix GL12CX. It features a new 9th Generation Intel Core i9-9900K CPU that's factory overclocked up to a top speed of 5.1GHz for a serious performance boost. Strix GL12CX is great for gaming, but it's capable of so much more: multitask, play, stream, and record your gaming sessions, with plenty more performance to spare!

Geared for the latest games

Hours of playtesting ensure that ROG Strix GL12CX runs the latest and most popular game titles smoothly. This gaming desktop pushes the envelope, running Call of Duty®: Black Ops 4 and Rise of the Tomb Raider™ at extremely smooth framerates, even at the highest visual settings.

At the heart of ROG Strix GL12CX is a motherboard with the latest Intel Z390 chipset, and an ROG-exclusive DIMM.2 module for two M.2 SSDs that are cooled by a dedicated heatsink. Strix GL12CX gives you even greater storage flexibility - pair the dual NVMe drives in a speedy RAID configuration, or use one SSD as a system drive and one stick of Intel® Optane™ memory to accelerate your HDD. NVMe® PCI Express® (PCIe®) technology provides ROG Strix GL12CX with superfast transfer speeds to reduce loading times for apps and games. The M.2 PCIe 3.0 x4 SSD in Strix GL12CX is significantly faster than standard SATA 3 SSDs and HDDs.

Your machine, your style

Customizable Aura Sync lighting has over 16 million colors and several preset effects so you can customize your own RGB configurations, or use them to react to in-game events and environments in compatible games. There's even internal illumination on several components, all of which can be seen through the optional transparent side panel. You can even synchronize effects and colors with Aura Sync-compatible keyboards, mice, headsets, and other peripherals to give your gaming setup a consistent look.