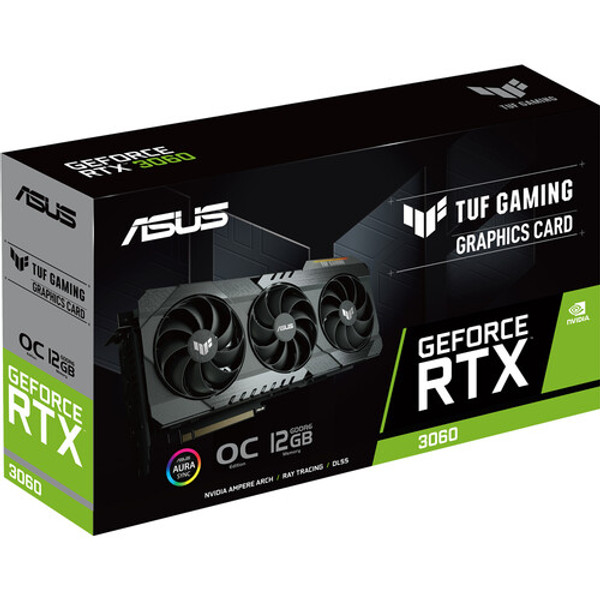 Based on the Ampere architecture and designed to handle the graphical demands of 1080p gaming, the ASUS TUF GAMING GeForce RTX 3060 OC Graphics Card brings the power of real-time ray tracing and AI to your PC games. The GPU features 12GB of GDDR6 VRAM and a 256-bit memory interface, offering improved performance and power efficiency over the previous Turing-based generation.

The front panel of the card features a variety of outputs, such as DisplayPort 1.4a and HDMI 2.1. HDMI 2.1 supports up to 48 Gb/s bandwidth and a range of higher resolutions and refresh rates, including 8K at 60fps, 4K at 120fps, and even up to 10K. The RTX 3060 is not just about high-resolution gaming. Computationally intensive programs can utilize the GPU's 4864 cores to accelerate tasks using CUDA and other APIs.

For cooling, ASUS implemented triple Axial-tech fans, providing improved airflow and dispersion. There is also Aura Sync RGB lighting. Using Aura Sync software, you can sync the RGB lights with other ASUS products for a customized gaming setup. With Aura Sync, you can sync to music, temperature-based color changing, or select from a variety of patterns and static options.