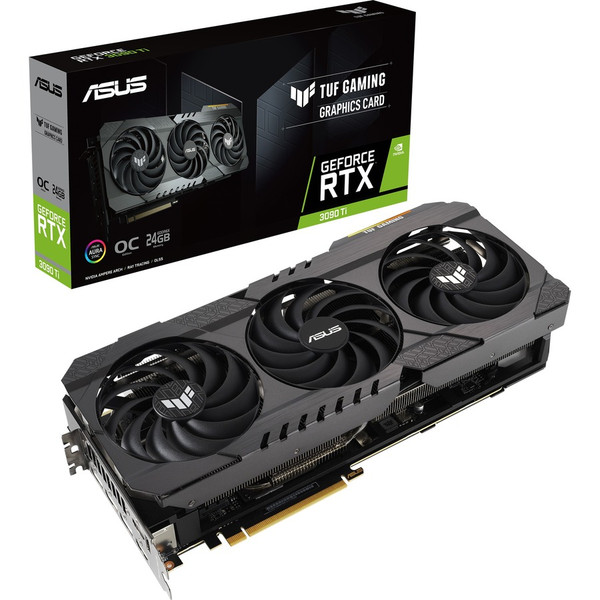 The TUF Gaming GeForce RTX™ 3090 Ti takes an expertly sculpted design and refines it even further. Its trio of Axial-tech fans are 20% taller and feature a half-width barrier ring designed for increased airflow. Additional fan turbulence optimizations keep noise levels down as the GPU dishes out frames, and a stop mode brings fans to a standstill during light usage. Passive cooling also gets a boost by expanding heatsink size, bringing the card's total width to 3.2-slots. And alongside, a slew of enhancements championed by its award-winning predecessors ensure the TUF is an absolute powerhouse for builders on the hunt for gaming bliss.

The two side fans spin counterclockwise to reduce turbulence. And to eliminate unnecessary noise, a stop mode halts all fans when the GPU temp falls below 50 degrees and power consumption is low.

To transfer heat into the fin array efficiently, we use a manufacturing process that improves the surface smoothness of the heatspreader at the microscopic level. The extra flatness allows for better contact with the die, helping to enhance thermal transfer.

The heat spreader wicks heat up into heatpipes that distribute it throughout the fin stack. The increased heatsink size provides more thermal headroom for the new high-performance chipset. This generation of TUF Gaming graphics cards also feature a dedicated heatsink for VRAM to keep temperatures well under maximum operating specs.