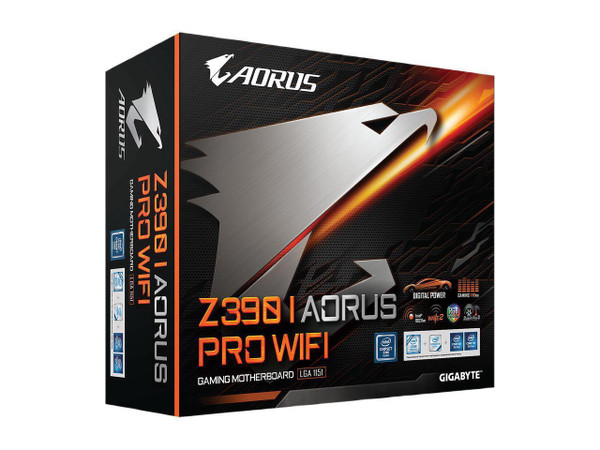 The falcon utilizes its powerful wings to soar through the skies and lock down its prey. The AORUS Core takes inspiration from the falcon's aerodynamic wings, incorporating a multi-layered design which features wing shaped contours and also resembles the falcon's high velocity ascension and dive through the skies. With sleek and metallic armor, the AORUS Core symbolizes advancement in technology with its futuristic style.

Z390 I AORUS PRO WIFI motherboard uses an all IR digital CPU power design which includes both digital PWM Controllers and PowIRStage MOSFET, and is capable of providing at least 40A of power from each phase,for a total of 240A. These 100% digital controllers and 8 Solid-pin CPU Power Connectors offer incredible precision in delivering power to the motherboard's most power-hungry and energy-sensitive components, allowing enthusiasts to get the absolute maximum performance from the new 8-core 9th Gen Intel® Core™ processors.

Support for DDR4 XMP Up to 4400MHz and Beyond

AORUS is offering a tested and proven platform that ensures proper compatibility with profiles up to 4400MHz and beyond. All users need to do to attain this performance boost is to ensure that their memory module is XMP capable and that the XMP function is activated and enabled on their AORUS motherboard.

DDR4 memory modules are available at a stock frequency of 2133MHz, but as frequency tweaking requires a considerable amount of effort and knowledge, memory vendors encode XMP profiles which can automatically modify the timings of the supported memory modules to work with your CPU and to achieve increased performance.