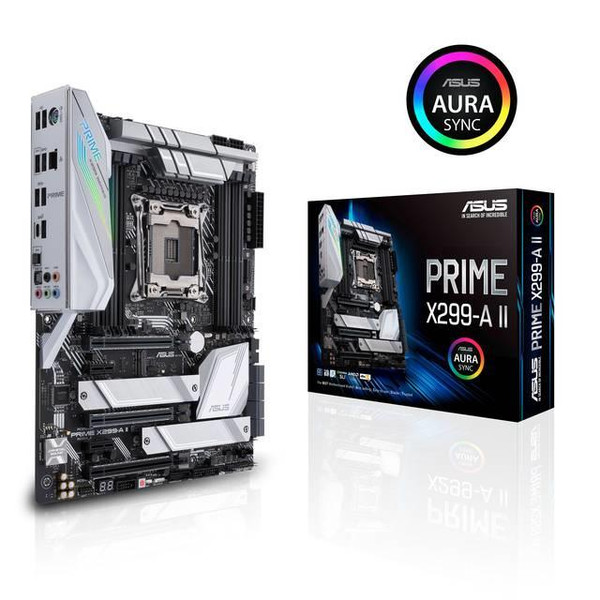 The Prime X299-A II caters to users with serious pursuits: Those who prefer to put their high-core-count processors to more productive use. This high-end desktop board combines cutting-edge performance with our signature features, including an enhanced VRM tailored for running the CPU performance at stock speeds, intuitive cooling control, next-gen connectivity, and extensive customization.

Get the most out of all your cores

Intel®'s high-end desktop platform raises the stakes with updated Intel Core™ X-Series Processors that boast cores, cache, and bandwidth. The Prime X299-A II is ready for the additional processing power that plows through CPU-intensive tasks, and the extra bandwidth allows you to add more GPUs and NVMe SSDs to accelerate a wide range of work.

The LGA 2066 socket is compatible with Intel Core X-Series Processors with up to 18 cores, over 44 PCI Express® lanes, and 165-watt thermal design power (TDP). Those specs require serious power, so the Prime X299-A II is equipped with an enhanced power solution that includes 12 power stages that line up neatly along the top edge of the PCB.

ProCool II connectors ensure a snug and reliable connection to the EPS 12V power lines. The second-generation features upgrades of metal amour and solid pins for better heat dissipation, as well as a warning LED-display with a BIOS POST message to indicate an improper connection.

Each PowIRstage is accompanied by a high-permeability alloy-core choke rated to handle 45 amps.

Cool to the core

Effective cooling is extremely important, even at stock speeds. That is why the Prime X299-A II allows consolidated cooling control of the entire system, even for the most hardcore rigs. It comes equipped with onboard heatsinks, an array of fan headers, and options for water pump or AIO headers.

Two M.2 slots are covered by heatsinks to combat temperature-induced throttling that can affect performance during heavy, sustained storage loads.

A reinforced backplate improves the stability of the board, and the included thermal pad efficiently directs heat away from the VRM and other components.

Prime X299-A II features the most comprehensive cooling controls ever, configurable via FanXpert 4 or the UEFI BIOS.